The Hopkins alumni are among 30 recipients of the fellowships, which honor immigrants and children of immigrants with exceptional potential to make a difference in their fields.

Three Johns Hopkins alumni are among the 30 recipients of the Paul and Daisy Soros Fellowship for New Americans, which honors immigrants and children of immigrants who are poised to make meaningful contributions to United States society and culture, as well as their respective academic fields.

Fellows Quenton Bubb, Zubia Hasan, and Alexander Pisera were chosen from a pool of more than 1,800 applicants. As fellows, they’ll each receive up to $90,000 over two years to support their postgraduate studies. Soros Fellowships support immigrants, children of immigrants, green card holders, naturalized citizens, and those who have been awarded asylum or refugee status.

Quenton Bubb’s parents met as teenagers in St. David’s, Grenada, later immigrating to Brooklyn, New York in the 1980s, where Bubb and his brother were born. As the first Soros Fellow of Grenadian descent, Bubb describes the country as “a small place with a revolutionary history,” and he says he stands on the shoulders of the giants who worked to make the opportunities he has possible. When he was in high school, Bubb knew he wanted to study medicine, but couldn’t shake his passion for physics and biology. After visiting Hopkins, he chose to pursue biophysics, graduating with a bachelor’s degree in 2015. Following his graduation, he went on to earn a master’s degree from the University of Cambridge as a Marshall Scholar. He is currently pursuing an MD and a PhD from Stanford University, where he is engineering patient therapies, and hopes to continue his clinical training toward becoming a hematologist and oncologist specializing in the development of cell and gene therapies.

Born and raised in Karachi, a coastal city in Pakistan, Zubia Hasan and her family immigrated to the United States with a permanent residency in 2017, a decade after her maternal grandmother sponsored the family. With a passion for learning new things, and a deep interest in writing and research, Hasan pursued physics at Hopkins, graduating with a bachelor’s degree in 2021. While at Hopkins, she took several writing and literature courses, saying she was grateful for the opportunity to express herself both in physics research and in fiction and poetry writing. The support Hasan received from the physics department at Hopkins and from her mentor, Professor Tyrel McQueen, drove her to continue her studies in physics; she is currently pursuing a PhD in the subject at Harvard University. She plans to remain in academia following her PhD and says her main goal is to work with immigrant communities in the United States to help them overcome barriers in pursuing an education.

Alexander Pisera’s parents immigrated to Boston, Massachusetts from Poland in the 1980s, seeking opportunities beyond the communist regime in their home country. Building their lives after finding luck in a green card lottery, Pisera’s parents settled in Bedford, Massachusetts, where Pisera and his sister were born. With a lifelong interest in science, Pisera enrolled at Hopkins as a chemical and biomolecular engineering student, playing on the rugby team and conducting research in several labs, going on to graduate with his bachelor’s degree in in 2017. He is currently pursuing a PhD in biomedical engineering at the University of California, Irvine, studying synthetic biology in Professor Chang Liu’s lab. While moving across the country during the pandemic was challenging, Pisera says he’s found the work rewarding, and he hopes to start an innovative company to use synthetic biology to advance society—and meet the goal of his grandfather to start a business in the family. 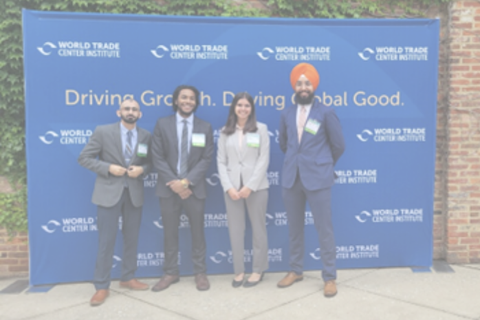